The spirit of celebration

A rare mixture of elegance and happiness makes Barrière Le Fouquet’s far cooler than the average luxury hotel. That’s quintessentially a place to be how we understand it: A gathering of classy people who want to have fun.

Where does the very special spirit of this hotel come from?
To understand it, you have to know the history of two famous names – „Barrière“ and „Le Fouquet’s“.

„Barrière“ is related to a family that invented not less than the „French style“ tourism, this combination of style and fun which is still unmatched in the world (with Paris, St. Tropez, Courchevel and St. Barth as todays outstanding examples). In the Roaring Twenties the greatest names of that time rushed to the Casino of François André in Deauville: Coco Chanel, André Citroën and the Rothschild family, for example. It was a place to show off, have fun and thrive. A friend to kings and princes, artists and politicians, François André created many French luxurious resorts for them.

They acquired a prestigious Brasserie on Paris’ Champs-Elysées – „Le Fouquet’s“. This luxury brasserie is a cinematic hotspot since the 1930s, greatest names like Baker, Kelly, Truffaut, Godard and Chabrol gathered there. Since 1990 Le Fouquet’s is registered on the Historic Monuments inventory and officially named a French cultural hotspot – but even today well-known figures from cinema come here. Following the death of the childless François André his nephew Lucien Barrière took the helm of the group in 1962. He developed the Barrière Empire following the same policy as his predecessor: cultivating the French joie de vivre. In Deauville he hosted the greatest figures from high society – residents included the legendary couple Brigitte Bardot and Gunther Sachs – and helped to create the famous Deauville American Film Festival. In the 90s Lucien Barrière daughter Diane Barrière and her husband Dominique Desseigne led the group. 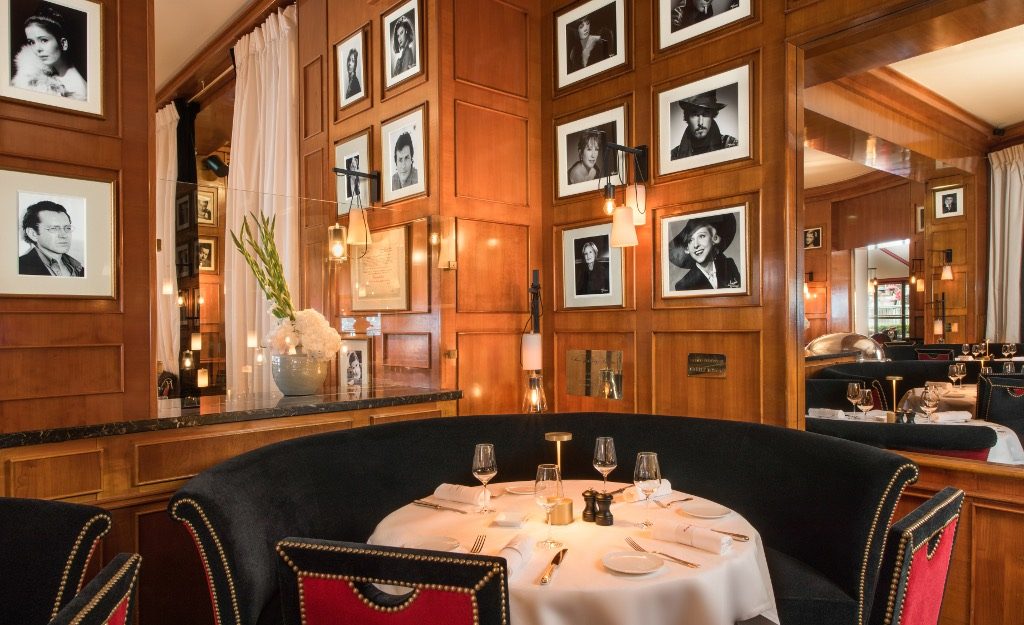 How does the place become a hotel?
In 2006 Dominique Desseigne, the heir of Barrière group, created the hotel as the fulfilment of a family dream and an extension of the legendary address Le Fouquet’s. From the five distinct buildings that make up the hotel, the famous architect Edouard François created a single entity by reinventing Haussmann’s style.

In July 2017, after six months of refurbishment, the hotel reopened with gloriously refurbished rooms and restaurants. 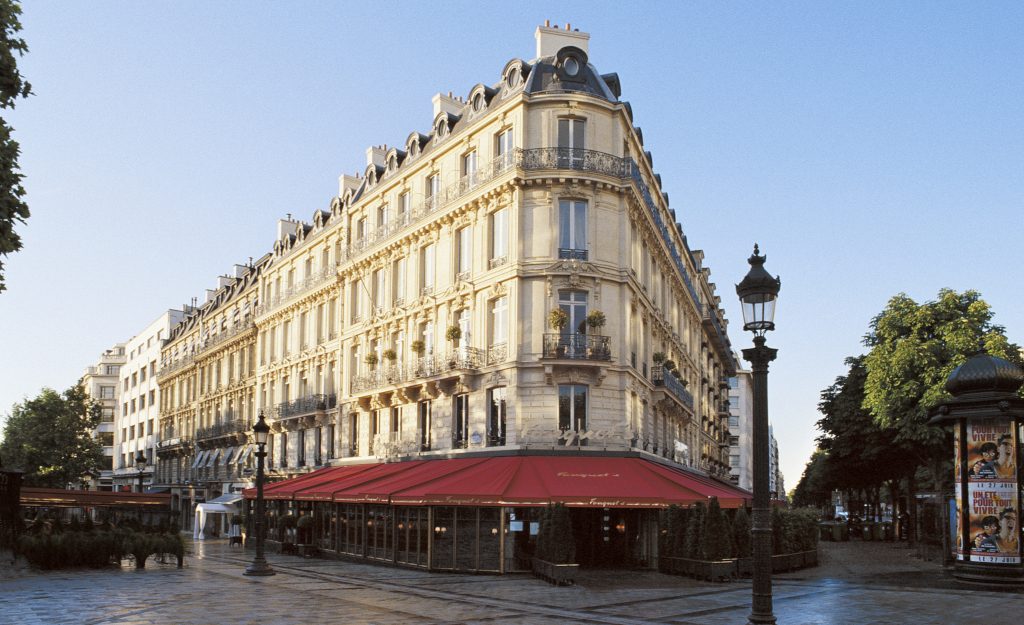 Is the Barrière Le Fouquet’s really cooler than the other Parisian luxury hotels?
Yes, in fact some of the famous houses in town feel a bit stuffy in comparison. Sorry. What makes the Hotel Barrière Le Fouquet’s special is the inherent spirit of celebration. It’s the perfect place for classy people that also want to have fun.

It’s location between the prestigious Avenue George V and the Champs-Elysées is not only minutes away from the cultural landmarks and the boutiques of major designers – but also in the middle of all the real places to be: Raspoutine, the best club in town, is so near that you can make it from dance floor to bed within three minutes. 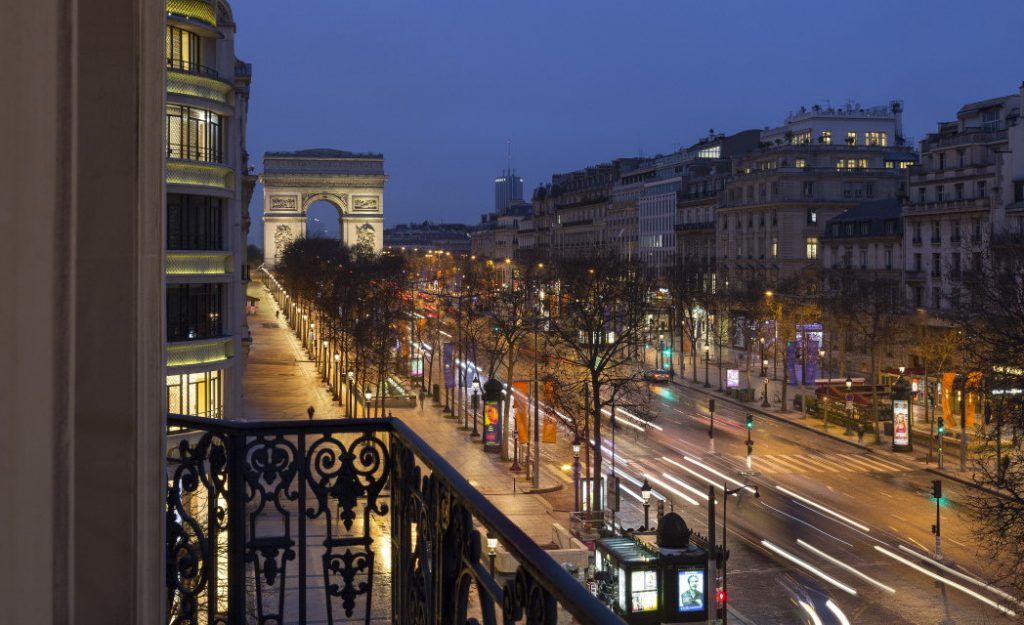 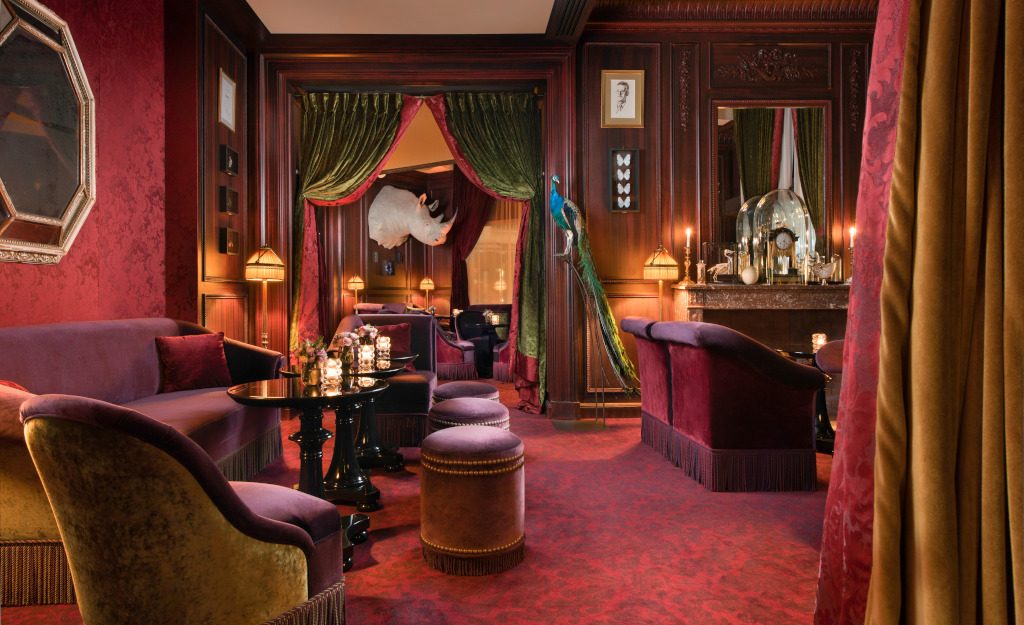 But in the hotel lobby with its frivolous charm you might deviate from your way. To your left is the hidden entrance to Marta, a private bar, and the second place in town where the celebrities, models and cool people have fun. If you make it to your room you can have a night cap with some music: the sound system integrated in the room is from sensational quality for a hotel, and the intelligently designed hotel building provides exceptional interior sound insulation.

You hear nothing when you sleep, but after that you open the floor-to-ceiling-window and look above the prestigious Avenue George V OR the Champs-Elysées

Probably you will sleep longer after that night so it is good that exterior sound insulation with quadruple glazing systems make the acoustics of every room 30-40% above the average. You hear nothing when you sleep, but after that you open the floor-to-ceiling-window and look above busy Champs-Elysées or Avenue George V.

During the day you might relax in the hotels courtyard restaurant-bar which is a green peace heaven in the heart of Paris. Or you have a short walk to L’Avenue, the see-and-be-seen place within walking distance. You can start the next night in the lively Matignon, another place to be nearby or certainly in the famous in-house brasserie Le Fouquet’s. 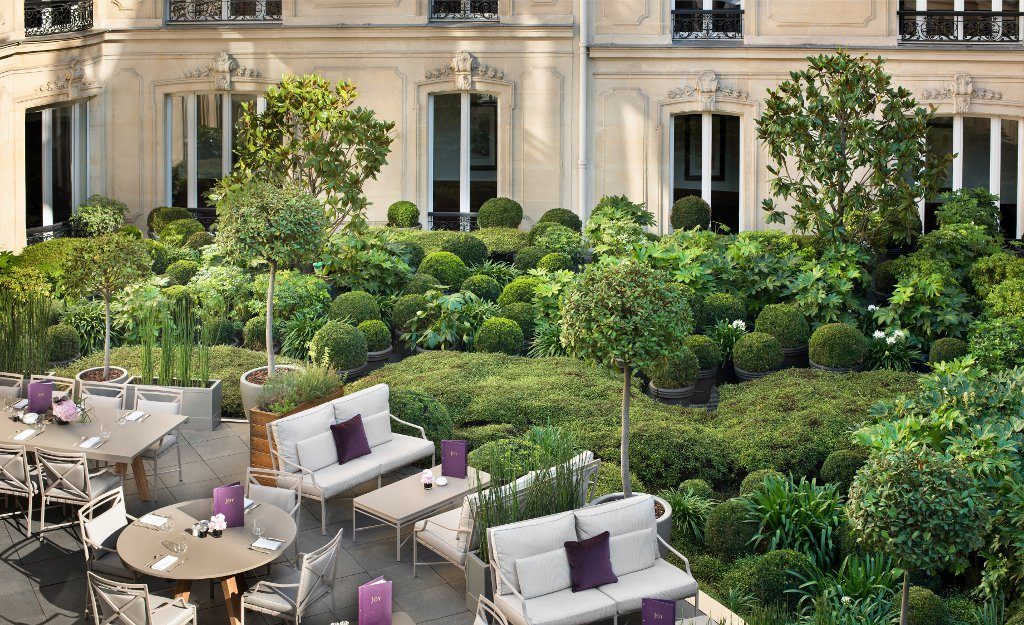 How good are the rooms?
Apart from the perfect acoustics they have also warmth and elegance. After the refurbishment by famous designer Jacques Garcia all rooms and suites are adorned with new fabrics and bright colours. Very noble.
Sliding mirror doors reveal elegant bathrooms in black granite that spacious and functional. All are equipped with bath tubs and separate showers. The mirrors are anti-mist, while the televisions concealed in the walls invite to unwind in a luxurious bubble bath.
Nice detail: Hotel Barrière le Fouquet’s offers a butler service, especially the unpacking of your belongings in the dressing room is wonderful. 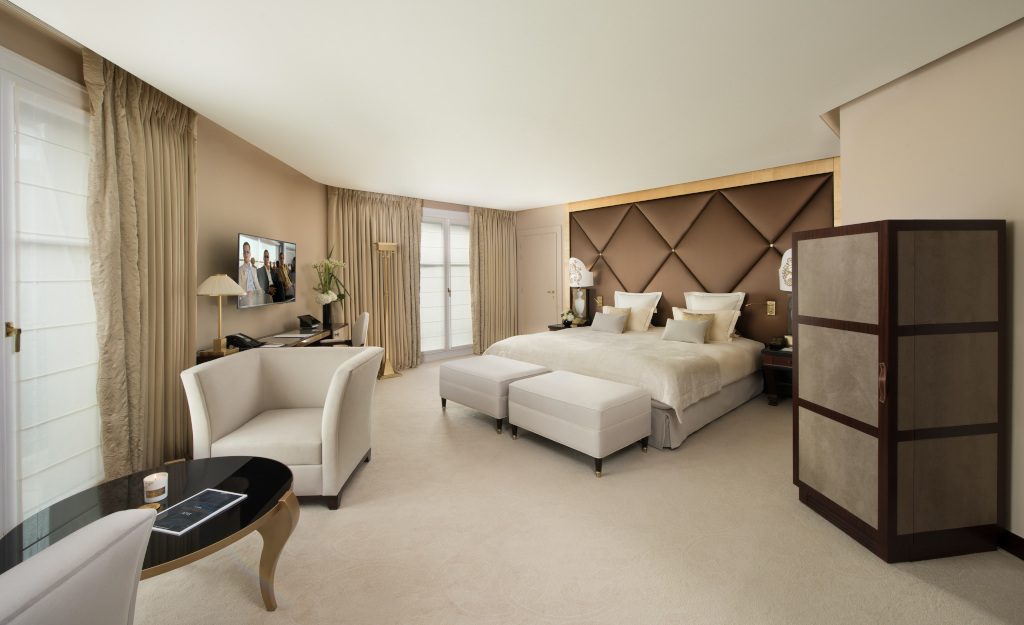 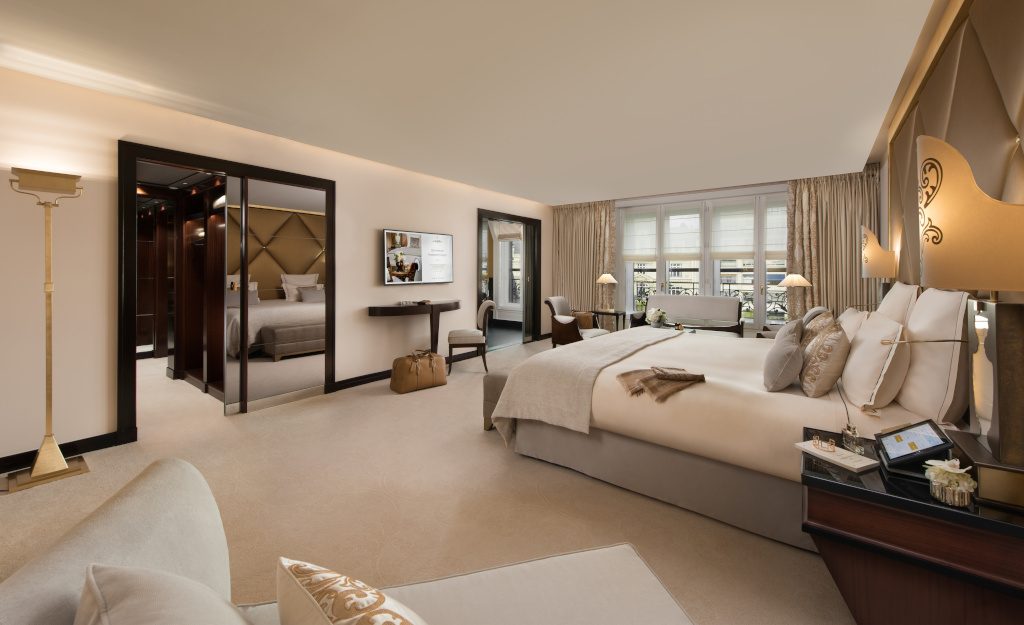 That brings us to the service…
During our visit the service quality was above the normal luxury standard. The staff is attentive, professional and above all very very friendly. 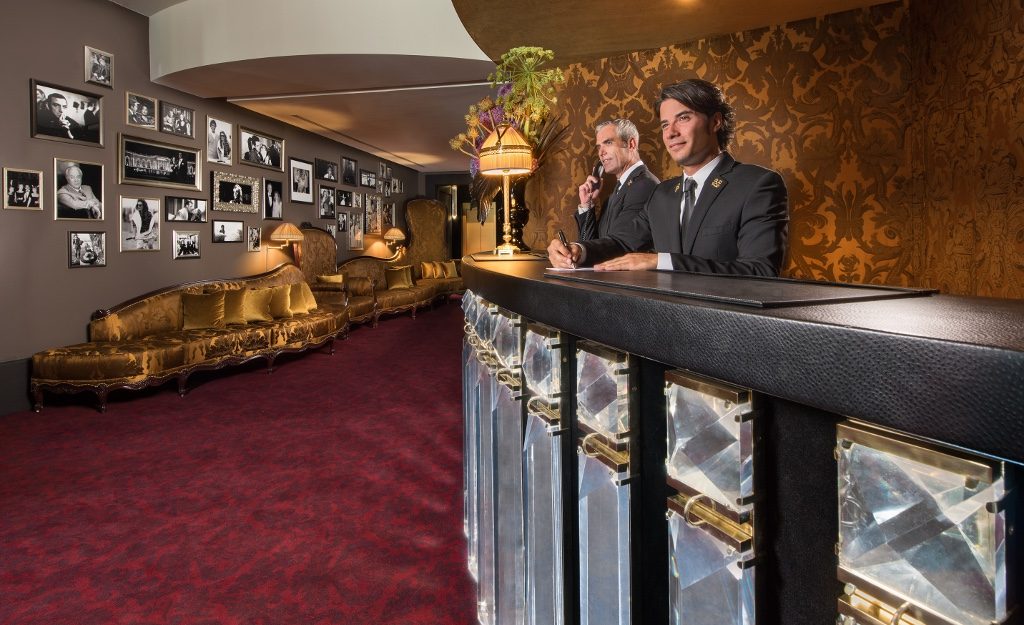 On the hotel’s 5th floor, there is also a 250 sqm Presidential Suite that overlooks the Champs-Elysées…
Yes, and private hire of the entire 5th floor creates the Grande Suite de Paris: 535 sqm of ultimate comfort at the heart of the Champs-Elysées. White ostrich leather seats, mahogany bookcases, beige papered walls, pivoted doors gilded with gold leaf, velvet armchairs and sofas, delicately painted walls in the lounge. 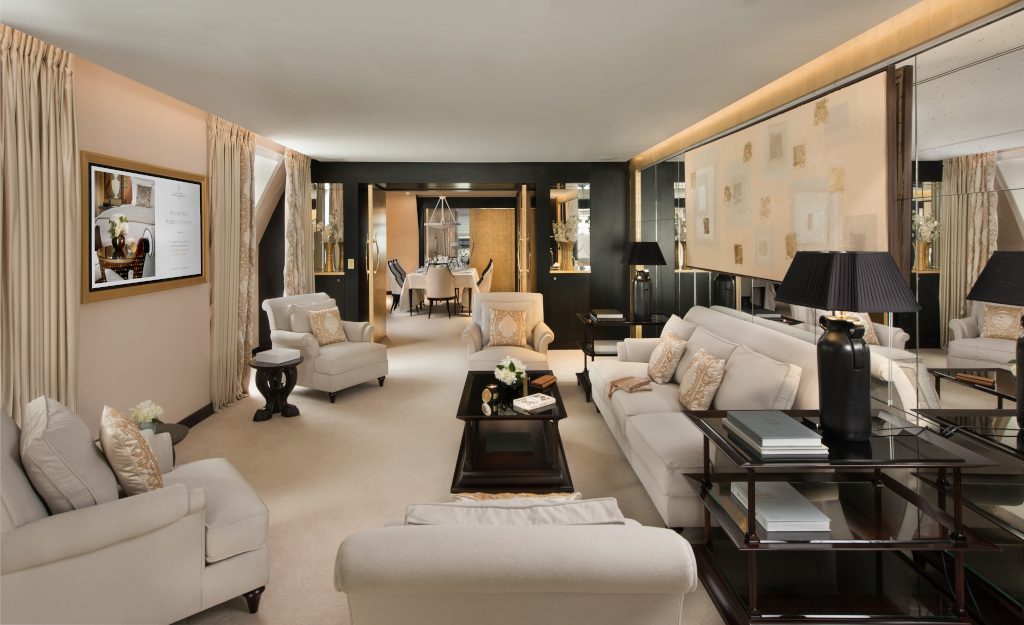 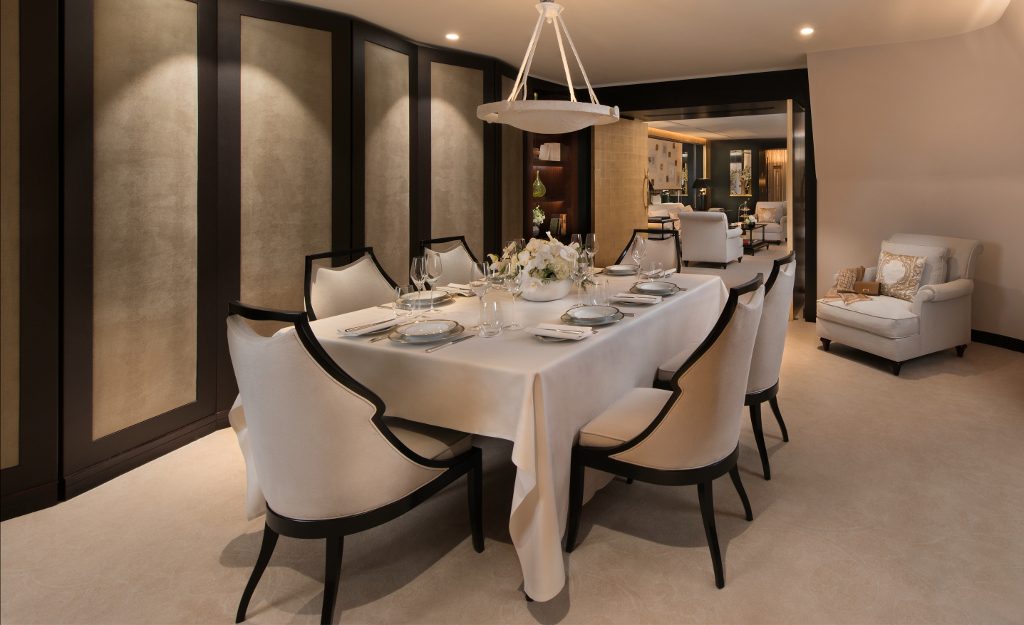 Some words about the Spa…
It is a 750 sqm oasis with classy style that boasts a swimming pool, a sauna, separate steam rooms for men and woman and a jacuzzi aqua circuit like no other in Paris. 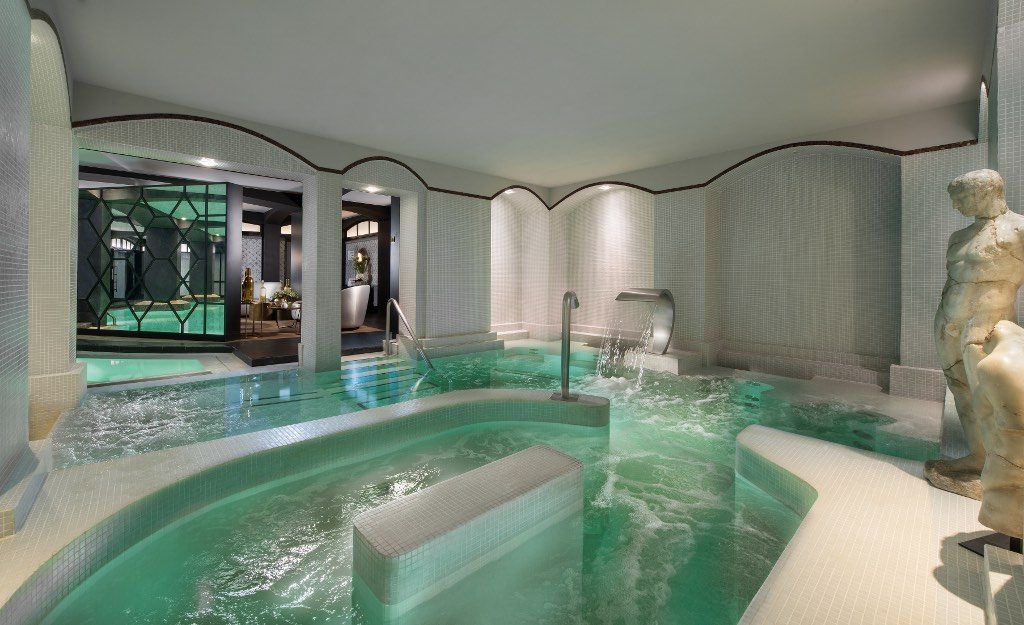 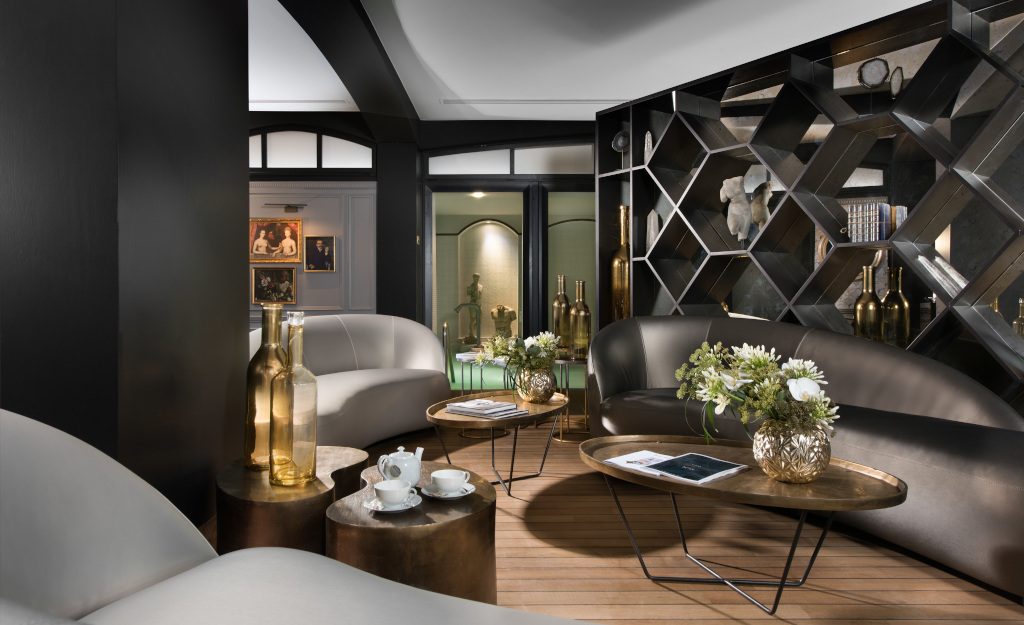 And the verdict?
The manifesto of Barrière says that „luxury only makes sense if it brings happiness and elegance goes with pleasure like life with celebration“. This philosophy is very alive in Hotel Barrière Le Fouquet’s and makes it a place to be how we understand it: A gathering point of classy people who want to have fun. 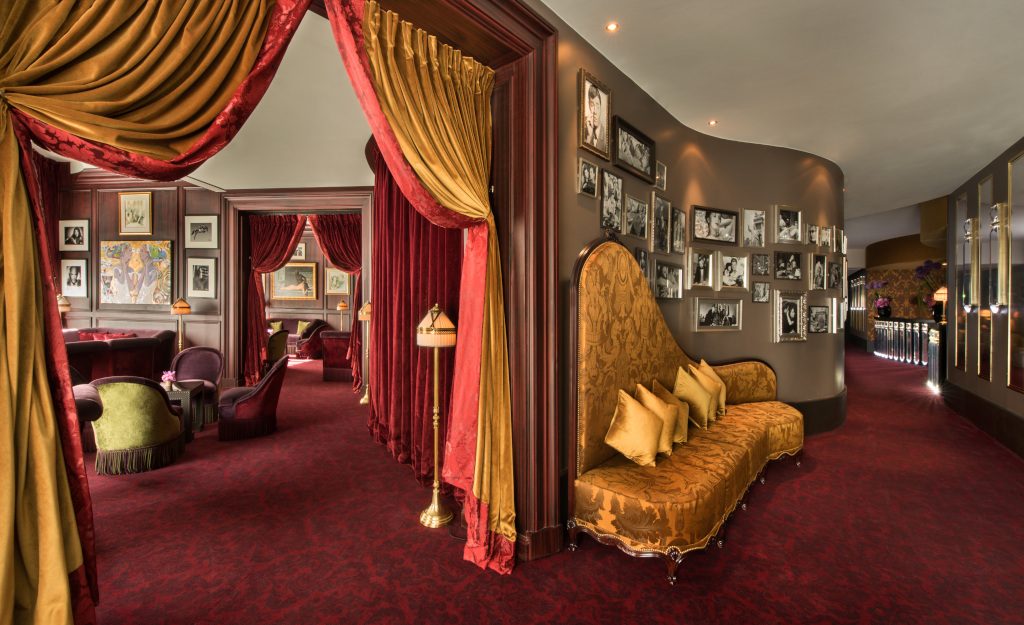 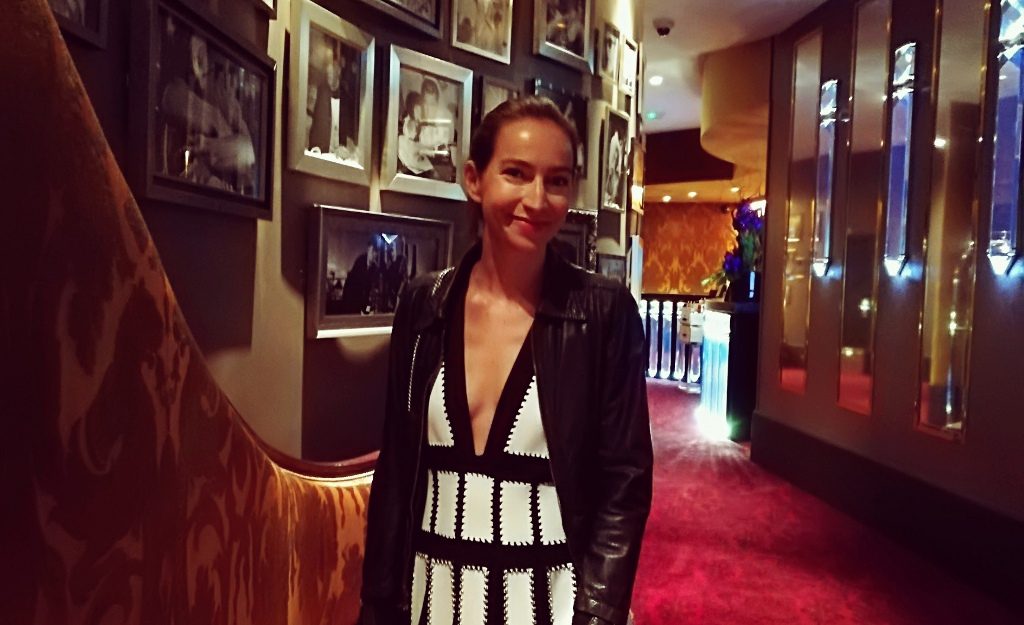 A relaxing hideaway in the middle of the world